USAFA Board of Visitors convenes virtually

The U.S. Air Force Academy Board of Visitors met for a full-day, virtual session on Wednesday, Nov. 18.

The Board is appointed by the president and Congress to independently review the “morale, discipline, curriculum, instruction, physical equipment, fiscal affairs, academic methods and other matters relating to the Academy which the Board decides to consider.”

Brig. Gen. (Ret.) David Ehrhart ’75 was elected the new chairman of the Board. Col. (Ret.) Doug Lengenfelder ’79 was elected as vice chair.

Ehrhart opened the gathering by thanking Gen. (Ret.) Edward Rice ’79 for his service as the BOV chairman over the past several years.

The new USAFA superintendent, Lt. Gen. Richard Clark ’86, greeted the BOV members and shared his excitement over his new role at his alma mater.

He outlined his four primary priorities for the months ahead, including:

A significant topic of discussion for the meeting was the institution’s response to the global pandemic.

Clark offered kudos to the entire USAFA team for its efforts to continue operations despite the obstacles resulting from the health challenges.

“This Academy has been absolutely amazing,” he said.

He singled out the volunteers who are part of the Pandemic Math Team, who used mathematical equations to determine the necessary level of surveillance testing to safely bring the Cadet Wing back to USAFA.

Col. Doug Wickert ’95, the Pandemic Math Team leader and permanent professor in aeronautics, briefed the BOV about the important efforts. He suggested the planning for operations was similar to planning for a “military campaign.”

The goal of Academy leaders was to keep COVID-19 at a minimum, Wickert said, not completely eliminate it from the population. The aim continues to be to identify an emerging surge in cases before it gets out of control, then to quarantine or isolate positive or exposed cadets to reduce the infection rate.

Initial testing levels totaled about 15% of the Cadet Wing each week.

But when SARS-CoV-2 numbers began to spike in November, the Academy tested all cadets within a two-and-a-half-day period to accurately measure the outbreak. COVID-19 numbers were high initially but have since come down significantly.

“We think we have that surge or pulse under control,” he said.

Maj. Gen. Michele Edmondson, USAFA commandant of cadets, updated the BOV about challenges her team has encountered due to the pandemic. She noted that three floors within Sijan Hall have converted to handle quarantine and isolation cases. In addition, some cadets are now housed in three hotels in Colorado Springs to allow for more social distancing.

Edmondson also reported that cadets have returned to Mitchell Hall to enjoy hots meals. The Cadet Wing has been split into two groups, and those groups eat at two separate times. The cadets can now sit 10 per table, with newly installed plexiglass partitions offering extra protection from virus spread.

Edmondson said her team is fully aware that the current pandemic environment is not ideal and some cadets are struggling as a result.

“This has been a hard journey,” she said. “The cadets are tired.”

The focus now is to get the Cadet Wing healthy, successfully complete finals and get them home for the holiday break, she said.

Brig. Gen. Linell Letendre ’96, USAFA dean of the faculty, told the BOV that her team was able to successfully pivot to online classes within a 10-day period last spring, despite inadequate information technology (IT) infrastructure.

She reported that USAFA continues to lag behind necessary IT upgrades by about $20 million a year, and she’s hopeful that the institution can secure stable funding in the future to address the issue.

Among other topics discussed at the BOV meeting:

For the Class of 2021, only 400 pilot slots are available due to fewer Air Force pilots transitioning out because of the ongoing pandemic. The goal for the next class is to send 40 new graduates to remotely piloted aircraft and about 100 to the Space Force. 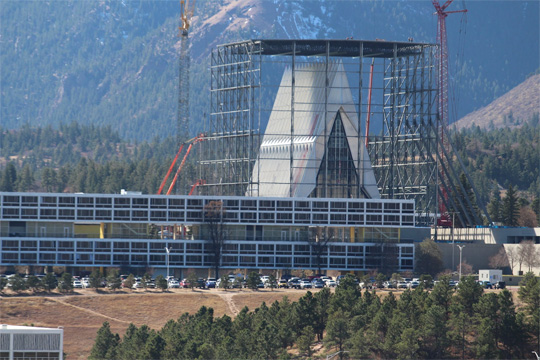