Representatives from the three classes that have contributed to the restoration of the USAFA Air Garden toured the project Thursday, Oct. 1.

Donors from the USAFA classes of 1972, 1975 and 1976 — in partnership with the Academy — contributed to the renovation of the Air Garden on the Terrazzo. Work began June 15 on the project, which will restore the original look of the garden, including multiple pools and plantings.

Morgan said the Class of 1972 was almost unanimous in its support of the project.

“The Air Garden was so beautiful when we were here,” he recalled. “Several generations of cadets have never seen the Air Garden the way it was intended to be. I can’t wait for it to come back.”

It turns out that Morgan’s son will be graduating from USAFA this spring.

“He’s so excited to be in the first class to graduate after the pools are restored to the way they were,” he said.

When deciding on a class project, Fariss reported that the Class of 1975 felt the Air Garden restoration would help create a bridge between the early classes and current cadets.

“We wanted to be part of a project that would recognize the past and be timeless for the future,” he said. “My class is glad to be part of the process.”

Wysocki said he was impressed with the progress of the restoration so far.

“I remember the grandeur of the Air Garden from many years ago and what a peaceful place it was on the grounds of the Academy in what is otherwise a very hectic environment,” he said. “It is in obviously rough form right now, but there is clear evidence that it is going to be a very grand and wonderful place at the end of the project.”

“The Air Garden was an important place back when I was a cadet in the early 1970s,” he said. “But we saw it deteriorate and change over time. When we saw that that we had an opportunity to restore it to its previous splendor, I said ‘sign me up.’ I look forward to watching the progress and it will be a glorious day when it reopens again.”

The $6.6 million project is being accomplished completely through donor funds. Apart from the class contributions, Moller Trust funds (which are administered by the Association of Graduates) were used to make up the difference in the project costs.

The Academy transferred the project to the Air Force Academy Foundation for construction with projected completion by the spring of 2021.

As originally designed, the garden flowed for 700 feet through a series of reflective pools, flanked by sunken planters, and intertwined with a labyrinth of aggregate granite walkways, winding through a collection of woodland trees and plants. When completed, the restoration will look as it did originally, but it will incorporate new technologies to enhance the maintainability and sustainability of the Air Garden for years to come. Final plans also include two new outdoor classrooms within the Air Garden. 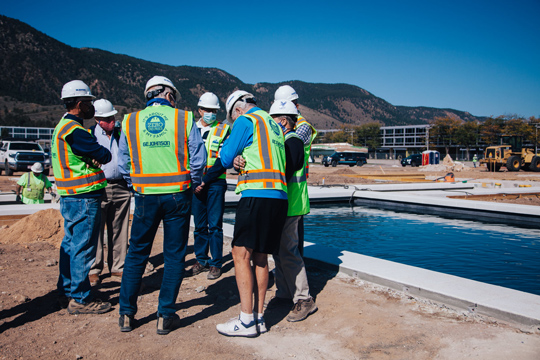 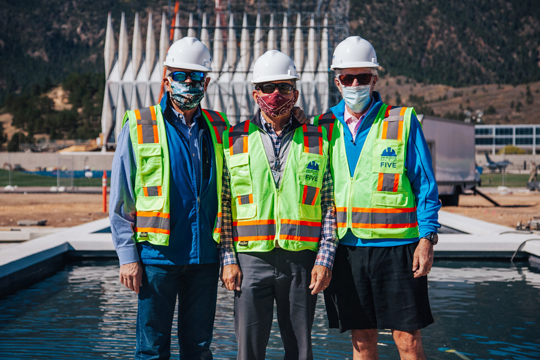