The Class of 2024 was accepted into the USAFA Cadet Wing on Aug. 10, 2020, during the annual Acceptance Day Parade.

It was an exceptionally hot morning, as thousands of cadets marched out to Stillman Field with no parents, family or friends in attendance due to the global pandemic.
Still, there was plenty of pomp and circumstance as the parade was livestreamed over the internet. The parade marked the end of Basic Cadet Training for the Class of 2024 and the official acceptance of the Doolies into the Cadet Wing.

Guest speaker for the event was Col. (Ret.) Edward Whalen, president of the Class of 1974 — the Legacy Class for the Class of 2024.

“The Class of 1974 was accepted into the Wing 50 years ago today, on this same parade field,” he said. “And we will be with you as your Legacy Class over the next four years for your milestones large and small.”

Whalen urged the members of the newest USAFA class to remember one thing — strengthen the bonds among all classmates and help each member to succeed and thrive.
“Help others where you are strong and they are weak — that’s the essence of being a classmate,” he said. “I’m not saying don’t be competitive. Competition brings out the best in us. But it’s about us and not me.”

Being a good classmate also means being willing to have tough conversations when needed, Whalen said.

“Have the guts to have the uncomfortable critical conversations with your classmates if they stray from behavior you know is proper,” he said. “When someone’s ego is getting too big for their own good, pull them aside as a friend and classmate and talk to them. And if someone even slightly disrespects anyone racially, sexually or religiously, pull them aside as a classmate and talk to them.”

Whalen said the Class of 2024 may not yet recognize how valuable being a classmate will be, but he assured everyone that the bond they develop over the next four years will carry each through their military and civilian lives.

“Get to really know your classmates,” he said. “Confide in them. Lift them up. Trust them with your lives. You’ll become closer than brothers and sisters.”

Following Whalen’s words of encouragement, the fourth-class cadets marched out to their new squadrons and joined the rest of the Cadet Wing for pass in review in front of USAFA Superintendent Lt. Gen. Jay Silveria ’85, who participated in his final Acceptance Day Parade. He is set to retire in September and relinquish command in a planned Sept. 23 ceremony. (The new superintendent will be Lt. Gen. Richard Clark ’86, who was confirmed for his new role by the U.S. Senate last week.)

At the conclusion of the parade, the fully staffed squadrons marched immediately back to their dorms to install shoulder board on the fourth-class cadets. The Prop and Wing ceremonies were set to be conducted later in the day (Monday).

The Cadet Wing opens the academic year on Wednesday, Aug. 12, with a mix of in-person and online classes. The Academy continues to mandate social distancing and mask wearing in an attempt to limit potential transmission of the COVID-19 virus.

Help others where you are strong and they are weak — that’s the essence of being a classmate. I’m not saying don’t be competitive. Competition brings out the best in us. But it’s about us and not me. 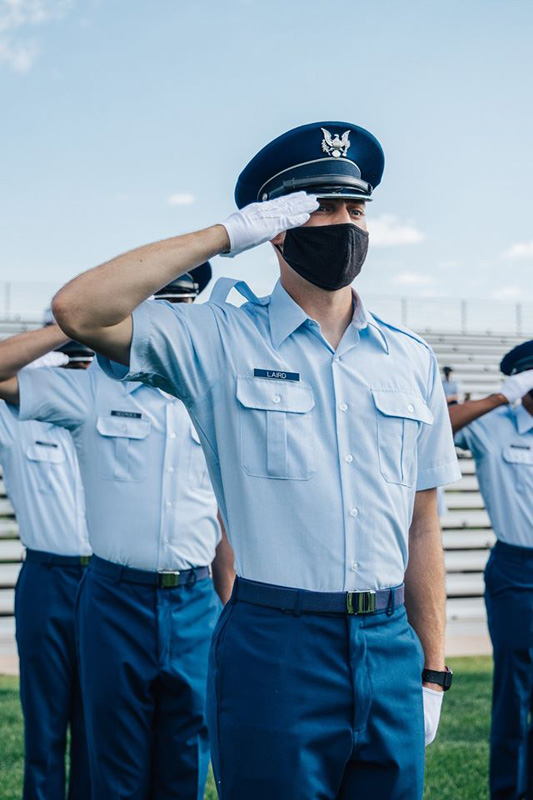 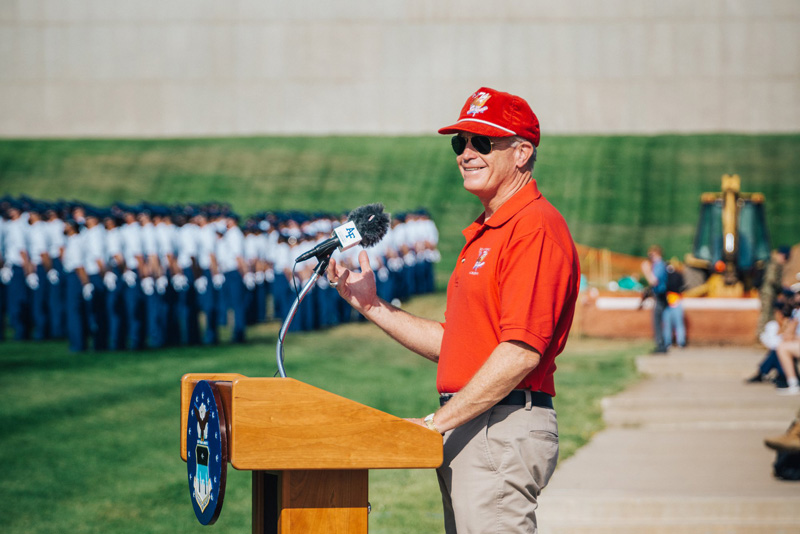 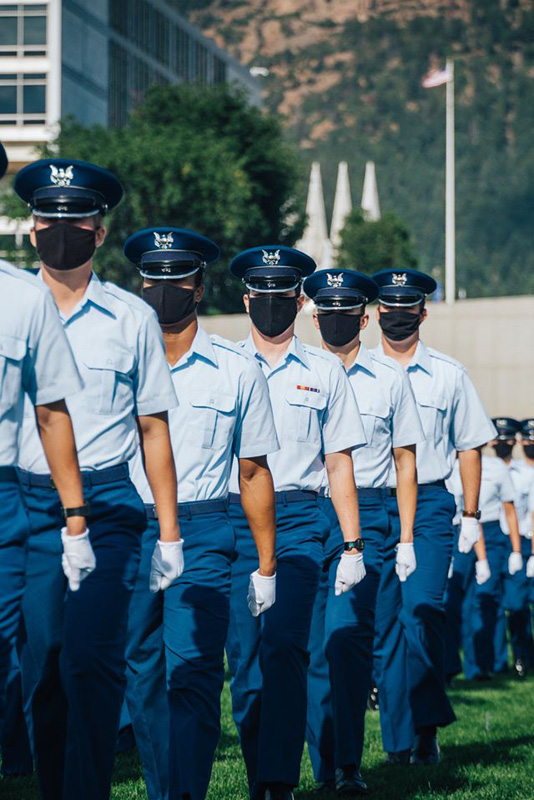 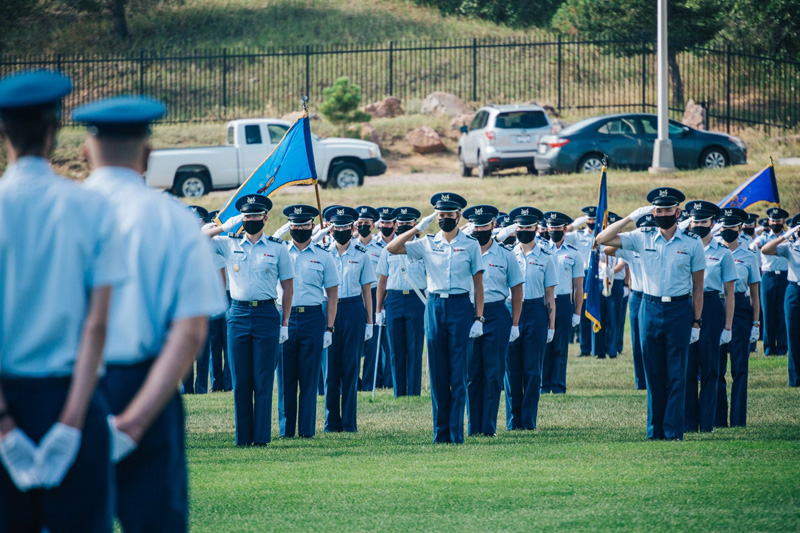 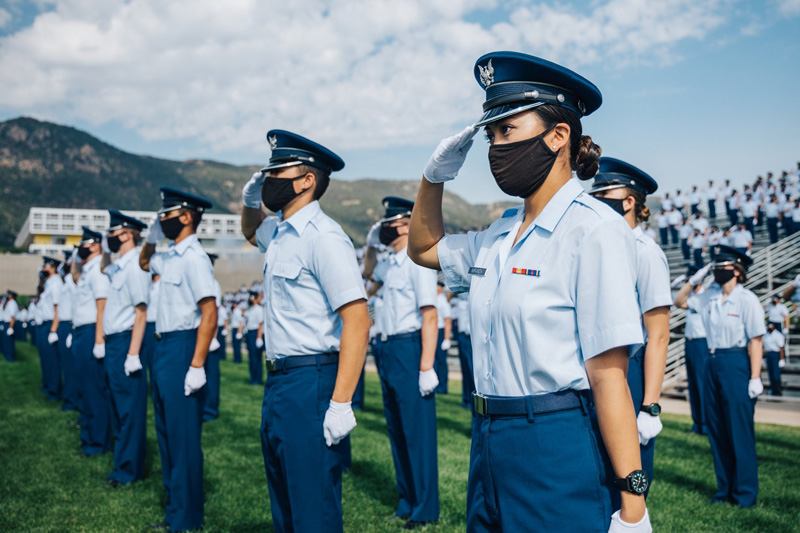 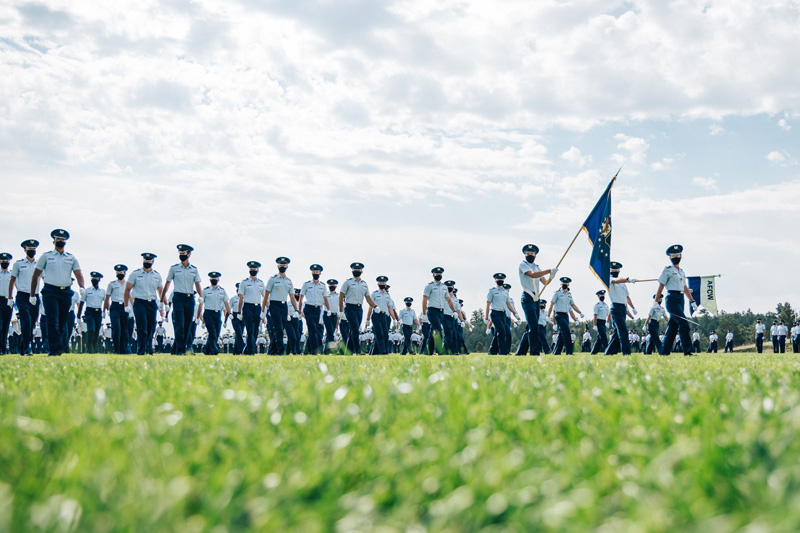