Class of 2023 accepted into Cadet Wing

The Class of 2023 was officially accepted into the United States Air Force Academy Cadet Wing during the annual Acceptance Day Parade Tuesday, Aug. 6, at Stillman Field. 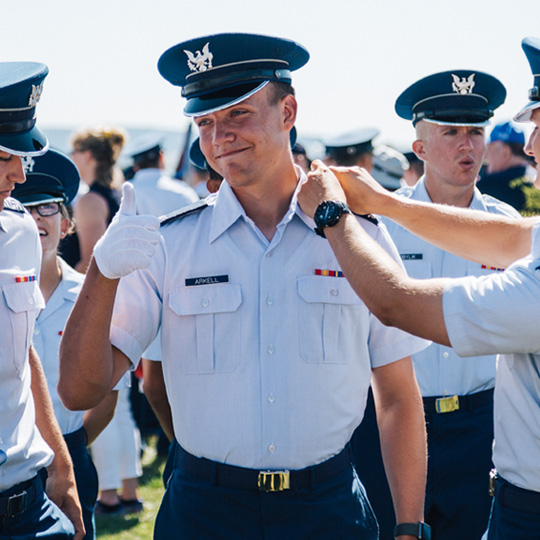 Representatives from the Class of 1973, the 50-year Legacy Class for 2023, were on hand to welcome the basic cadets to the Long Blue Line and present copies of Contrails to the top performing basic cadets.

Lt. Gen. (Ret.) John Regni ’73, the 17th superintendent of USAFA, offered a few words of wisdom as the new cadets prepared for the start of academic classes Aug. 8.

He noted that in 1,393 days, “plus a wake-up,” the Doolies will march into Falcon Stadium for their graduation ceremony.

Regni suggested there are five key takeaways that each cadet should grasp over the next four years of his or her Academy experience.

The Doolies then proudly joined their academic year squadrons, and celebrated the pinning on of their fourth-class shoulder boards.

The new cadets then were able to spend some time with family and friends who were in attendance.