For the first time in USAFA history, the Chapter President’s Conference and Parents’ Club Presidents’ Conference were held jointly. 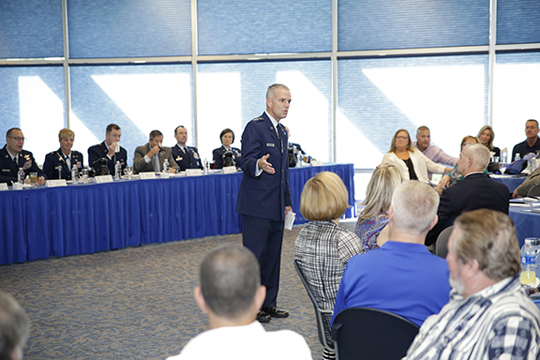 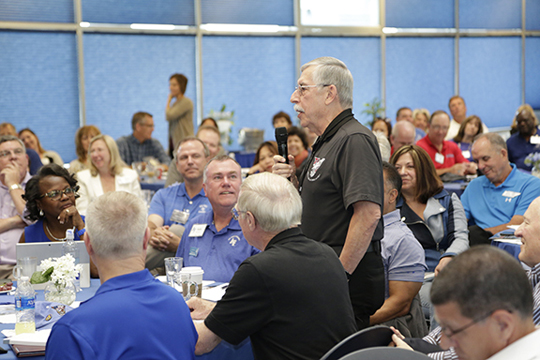 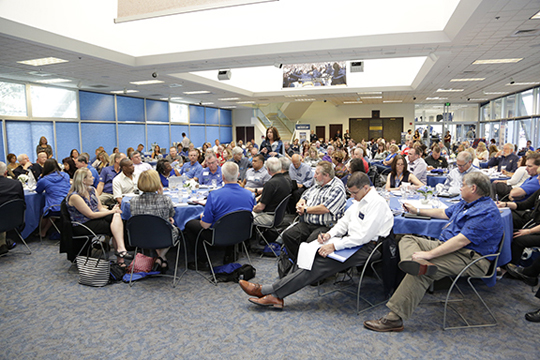 The two organizations — which oversee graduate clubs and cadet parent chapters throughout the nation — met at Doolittle Hall on Thursday. The Chapter Presidents’ Conference was held a second day — Friday — as well.

Lt. Gen. Silveria welcomed the parents’ club leaders and Association of Graduates chapter leaders and pledged to work with all of the organizations that seek to promote and strengthen USAFA.

“Ultimately, the most important thing for us is that we produce a cadet that is a leader of character and that will be a leader of airmen,” he said. “That is why we’re here.”

He told the group that his most recent Air Force assignment was running the air war out of Qatar. He witnessed the types of officers that USAFA is producing today.

“I got to see, first hand, the graduates of the Academy and what they were doing,” Lt. Gen. Silveria said. “It was unbelievable … to see the difference they are making in our profession of arms.”

Lt. Gen. Silveria said he will focus on a handful of priorities during his tenure as superintendent: a culture of innovation and making things better at the Academy and in the Air Force; a culture of assessment and feedback to evaluate progress; and a culture of respect and dignity.

The superintendent provided updates concerning capital projects that are underway or about to begin, including the planetarium renovation; Cadet Chapel renovation; a new visitor’s center in partnership with Colorado Springs; technology upgrades; a new, free-standing CyberWorx facility; and Sijan Hall renovation.

Campbell noted that about $1 billion in capital projects are planned over the next decade.

In his brief opening comments, Knowlton thanked the crowd for their ongoing support of cadets who are on the road for athletic and academic opportunities.

“What you all do is critical to keeping us connected with our alums and with our parents,” he said.

Other questions from the crowd focused on USAFA curriculum changes, the Academy’s financial status, and changes in Basic Cadet Training.

When the two organizations split into separate groups, several parents’ organizations offered “best practices” tips to inspire new leaders in other parts of the country.

The Georgia Parents Club talked about its efforts to engage new members and retain them through the entire four years of their cadet’s USAFA experience.

The club pays particular attention to Inprocessing Day and Graduation, when most parents and cadets have questions about what’s about to happen. The club hosts conference calls leading up to both big events and invites everybody to dial in.

The club also works hard to stay connected with parents and cadets throughout the year.

In addition, to make sure the club remains strong, the club trains new leaders to take over for those who leave. The organization conducts monthly meetings via teleconference to keep people informed and to “transfer knowledge” to others.

The five Texas parents’ clubs talked about their annual “Texas Night” meal served at the Academy, at a cost of about $17,000.

This year, the Texas-sized BBQ served 1,500 cadets and 250 parents who attended and volunteered. The Texas parents clubs challenged other states to host similar events.

The chapter leaders also offered a few tips about successful events and efforts, including the hosting of a leadership and ethics conference at local high schools; movie nights for members; and mentoring assistance among fellow graduates.