Despite that fact, there is some confusion about when the move actually happened. Various sources provide different information. Perhaps because the move took place over several days, some confusion is inevitable. So when did the march-in take place?

In this piece, I will unpack the issue, describing the milestone as covered by several sources. By the end, I hope to provide a definitive answer to the question.

First off, we can dispel the urban legend that the cadets marched all the way from Denver. While that would have been impressive indeed, it would have been a mammoth undertaking (see sidebar). The members of the Class of 1962, having recently completed Basic Cadet Training, were bused to the North Gate. Led by upperclassmen and Air Training Officers, and with 400 cadets lining the route, they then marched the approximately four miles to the Cadet Area and up the battle ramp to the Terrazzo. That much we know.

That there was uncertainty about the actual date came early in my research. My go-to source for historical information about the Academy is former Academy librarian Col. George Fagan’s definitive work, The Air Force Academy: An Illustrated History. I was disappointed to learn that, essentially, he punted.

The cutline on the photo on page 120 says in part, “In late August, Basic Cadets climb the steep ramp leading to the Terrazzo Level of the Academic Complex. They had just completed a march from the North Gate." This lack of specificity is most unusual, as the book contains hundreds of exact dates.

My second most trusted source, the Academy base newspaper, failed to clear up the matter. Though the paper didn’t publish its first issue until 26 September 1958, subsequent issues addressed the historic march-in. The 19 December 1958 edition contained a review of the year. The section entitled “Move to Permanent Site” stated, “Climaxing an eventful summer, the Cadet Wing, numbering more than 1,100, completed its move from the interim site to the modern, permanent quarters north of Colorado Springs on August 31.”

Months later, however, as the first anniversary of the move approached, the 28 August 1959 paper reported, “Saturday, August 30, saw the Class of 1962, led by upperclassmen and air training officers, unload from buses outside the North Entrance to the site. They formed into columns each side of the westbound road leading to the Academic Area. Then the long hike began.”

An information sheet provided by the Academy Historian’s office provided yet another version of events. The document containing significant dates in August states: “28-29 August 1958 – The Cadet Wing marched from the North Gate to the dormitory area in a symbolic ‘march-in’ to the permanent site of the Academy.”

By this point, I was totally baffled, with four possible dates for the march. I hadn’t unpacked anything.

A search of other documents, however, began to bring the timing of the move into focus:

In September 2014, I polled graduates via the AOG e-publication 7258’. The query stated, in part, “You would think that the date of the August 1958 arrival of cadets and staff at the permanent site would be firmly established. You would be wrong.”

The solicitation elicited several responses. Some added to the growing confusion, but one provided some exceptionally useful information. A graduate mailed an original copy of the October 1958 issue of the Cadet Wing’s “Talon” magazine. That document contained an article written by then-Cadet Bradley Hosmer, Class of 1959, entitled simply, “Moving In.” (Hosmer, of course, would go on to become the No. 1 graduate in that first class, the Academy’s first Rhodes Scholar, and the first Air Force Academy graduate to serve as the Academy’s superintendent.)

The three-page article describes in great detail the complicated process of moving a school 60 miles. It states that the march-in took place on Sunday, 31 August. Hosmer even provides a time, writing, “This movement commenced at around 1300 hrs.”

Hosmer describes the final portion of the hike, from the parade grounds to the Terrazzo: “The band cranked up and in we came. The first thing we actually set foot on was the long, long ramp which is used now to get squadrons to and from the parade ground every Saturday. Going to parades isn’t too bad, nor is coming back – but that Sunday, as we drove our way up that first ramp, through a quarter mile of sand, and on up the second ramp to the ‘Terrazzo’, those rock inclines felt as though they should have had steps carved in them.”

I can certainly see why Col. Fagan chose to use “late August” rather than a specific date, and why other historical reviewers and writers were confused. Having said that, however, I believe the “preponderance of the evidence” points to 31 August. Particularly compelling is the detail and specificity in Hosmer’s report. For one thing, it was a first person account. Not only that, but Hosmer’s description was published two months after the actual march, so the time-proximity to the event would indicate a more accurate recollection. Plus, it’s General Hosmer; c’mon!

So, I believe we can now authoritatively state that the Class of 1962 and others marched from the North Gate to the Cadet Area on Sunday, 31 August 1958. 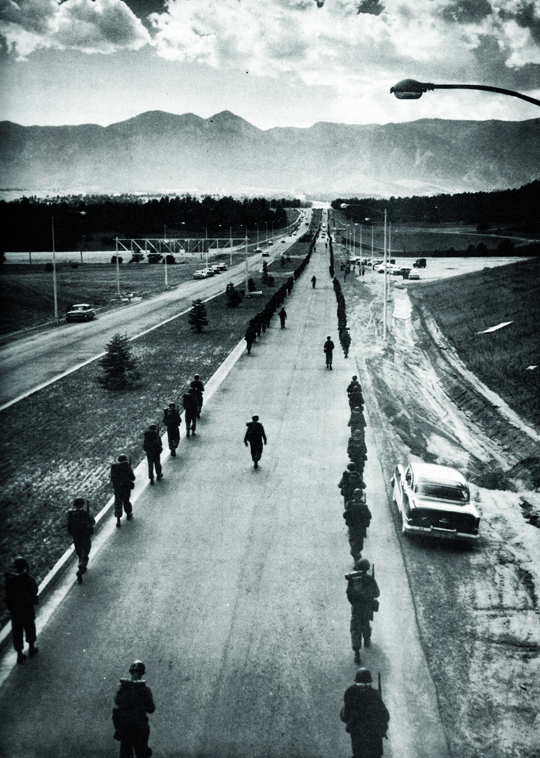 Marching from Denver would have been quite an undertaking

First off, we can dispel the urban legend that the cadets marched all the way from Denver. While that would have been impressive indeed, and the cadets in those days could totally have done it, it would have been a complex, wearying, and time-consuming enterprise.

Thought experiment: What if the cadets HAD marched all the way from Lowry Air Force Base?

For some basic facts and numbers, I first consulted a marching expert, Master Sgt. (Ret.) Don Comp, USAF, the former NCO for Drill and Ceremonies for the Commandant of Cadets. His response: “Normal marching cadence (the AFI calls it the "cadence of quick time") is 100 to 120 steps (or in band lingo beats) per minute... Our band prefers to play at 115 steps per minute so that is what you are used to hearing/seeing. They believe this is what most people will think is standard music. This is why if you go to Ft. Carson or Lackland AFB you will hear the same music but somehow it sounds different... both of these units use a slower cadence, right at 100 steps per minute.”

Comp also reported that, “The length of the step is 24 inches.”

As a starting point for the hypothetical August 1958 march, I chose the Commandant of Cadets building at the now-closed Lowry Air Force Base. That building, which was added to the National Register of Historical Places on 4 September 2007 for its important role in Air Force Academy history, is located at 1016 Boston Street, Aurora, Colorado.

Also, in the days before I-25, its predecessor, Highway 85/87, was a two-lane road reminiscent of today’s Highway 83. Such a motorway would certainly not have been conducive to having hundreds of cadets cruising along at walking speed (in formation, of course), but for the moment let’s assume they could do so safely.

Given that this is an endurance event and not just a quick jaunt across the Terrazzo to Mitch’s, let’s assume Master Sgt. Comp’s slower, 100-beats-per-minute, pace. (The math is easier for me using that round number, as well.)

So, if these superhuman cadets had marched straight through without any stops (again, easily doable for them), they could have made the trek in a little over a full day. It seems reasonable, however, to factor in a ten-minute stop every hour for rest, hydration, sustenance and the performance of required bodily functions. These breaks would add 5 hours and 27 minutes to the hike, raising the total time required to 31 hours and 52 minutes (and require a train of support vehicles with food, drink, possibly some medics, and a number of very portable porta-potties).

Even with the rest breaks, though, covering that distance in one shot might not be practical. Overnight rest stops would probably be in order. Here, mercifully, we have real world experience to consider. Walking 60 miles is, in fact, not that unusual. Susan G. Komen and Avon are two organizations known for conducting walks of that distance to raise money for charity. Their events are set up to take three days. That is an average of 20 miles per day, which seems a much more feasible pace for our intrepid cadets to have marched.

The overnight stops, of course, would bring a world of additional logistical challenges, primarily related to lodging. It would take a caravan to hold all the tents, sleeping bags, etc.

I guess Superintendent Maj. Gen. James E. Briggs and the leaders of the day made the right call to have the cadets march to the Cadet Area from the North Gate and not all the way from Lowry Air Force Base. 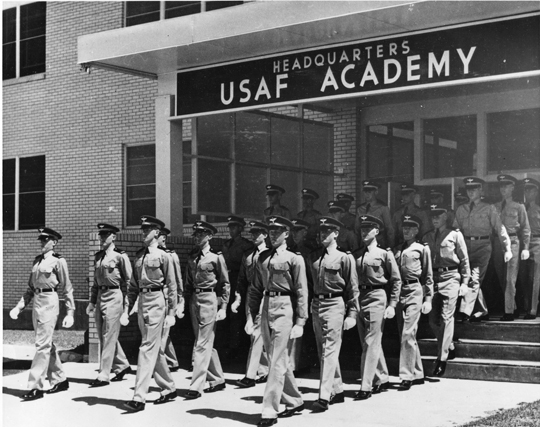 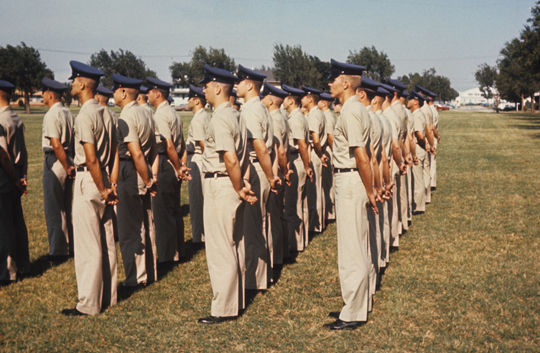 While the Air Force Academy cadets labored in Denver during the late 1950s, there was a flurry of building activity going on at the planned permanent site.

By the spring of 1958, it had become clear that the new facility would be sufficiently completed for members of every class to spend at least some time at the Colorado Springs facility.

Excitement for the transition, however, was not unanimous.

The author, Morton L. Margolin, had covered the meeting of the Academy Board of Visitors (BOV) that had taken place the day before. He reported that “Moving day at the Air Force Academy won’t be a matter of unrestrained joy.”

The reason, he reported: “Many of the cadets are engaged to Denver girls, and both the boys and their fiancées would much rather stay in Denver.”

Readers learned that “The romantic involvements were brought to the attention of the board in a series of closed-door conferences with the cadets.”

Apparently, the matter was a topic of serious and lengthy discussion at the BOV meeting. Margolin stated that Congressman Don Magnuson (D-Washington) discussed “the romantic difficulties” at the meeting. The piece included several quotes:

“Representative J. Edgar Chenoweth (R-Colorado) commented that the super-highway between Denver and the Academy should see considerably more traffic after the move is made.”

The BOV members learned that the marketplace, as it were, was already adjusting to the coming change. Again quoting the article: “Rep. Byron Rogers (D-Colorado) said the board was informed that the feminine enrollment at Colorado College in Colorado Springs was sharply up for next fall.”

In a response that today sounds quite sexist, Margolin writes that “Gen. Carl A. Spaatz, former Air Force chief of staff, who is a member of the board, said he didn’t think the situation would be permanent. ‘All the eligible Denver girls will be married as soon as the first class graduates,’ he commented.”