In honor of our weeklong Founders Day celebration, Steve Simon '77 is taking us back to where it all began — Lowry Air Force Base. Discover the history behind the Air Force Academy's original home, and see what still remains of the former base, in this special episode of Heritage Minute! | March 31, 2021

During this Founders Day week, we highlight USAFA's only Medal of Honor recipient, Lance P. Sijan '65. Col. (Ret.) Jimmie Butler recounts his personal Vietnam experience that included the attempted rescue of Sijan after his F-4C airplane was downed on Nov. 9, 1967. | March 30, 2021

67 years ago this Thursday, the United States Air Force Academy was founded with the stroke of President Dwight Eisenhower's pen. Since that day, more than 50,000 graduates of USAFA have gone on to do great things in the Air Force, Space Force and beyond ... | March 29, 2021

The publication has evolved through the years into an award-winning magazine that keeps the graduate community, cadets and friends connected ... | March 18, 2021

Did you know that there was an attempt in the early 1960s to create a neighborhood ski area on the Air Force Academy grounds? ... | March 4, 2021

In this episode of Heritage Minute with Steve Simon '77, we take a look at the first phase of the signage project at Falcon Stadium ... | February 18, 2021

USAFA grads were on hand as volunteers to help coordinate the traffic flow of people arriving at the Cadet Fieldhouse to get a shot ... | February 17, 2021

AOG Board responds to question posed about 6 January attack on Capitol... | February 1, 2021

A morale boost during the "Dark Ages!"

Thanks to a generous donation from Pepsi, and coordination from the Air Force Academy Foundation and the Association of Graduates, a huge delivery of snacks and drinks was shipped to the Cadet Wing this week ... | January 29, 2021

In this week's episode of Heritage Minute with Steve Simon '77, we explore the amazing history behind the North American F-100 Super Sabre ... | January 29, 2021

A conversation broadcast to cadets at the Air Force Academy featured top officials at the school discussing the balance between a warrior mindset and the unpredictable nature of warfare ... | January 22, 2021

Despite the challenges presented by the pandemic, Brig. Gen. Linell Letendre '96, the Academy's dean, said she's excited for cadets, staff and faculty as they start the semester and new calendar year ... | January 16, 2021

Messages from the AOG Board and USAFA Superintendent... | January 15, 2021

In this week's Heritage Minute video, Steve Simon '77 brings you inside the history of the radio station's founding as we celebrate the 50th anniversary ... | January 14, 2021

Thousands of cadets traveled back to the Air Force Academy in phases after leaving the school in December for a holiday break ... | January 10, 2021

The Lockheed Martin Commanders' Classic will feature the Air Force-Army football games in November 2021 and 2022 at Globe Life Field in Arlington, Texas. Air Force-Navy football game to move to 20th anniversary of 9/11 ... | January 1, 2021

The End-of-Year Giving Guide online provides information on deadlines and requirements for most giving options ... | December 21, 2020

Employees of the Association of Graduates and Air Force Academy Foundation, along with the Rampart AOG Chapter, donated 75 coats, a number of boots and hats and mittens to local elementary schools during this holiday season ... | December 16, 2020

The late December Graduation and Commissioning Ceremony was held in Polaris Hall ... | December 14, 2020

This week's episode of Heritage Minute takes a look at the history of Clune Arena. The facility is home to Air Force basketball, volleyball, wrestling and the annual Wing Open boxing championships! | December 10, 2020

Heritage Minute is back! And Steve Simon '77 is exploring the history behind the Air Force Academy's Cadet Field House ... | December 3, 2020

The 10th Force Support Squadron partnered with the Air Force Academy Foundation and the AOG to sponsor 40 large, squadron-based care packages to provide every cadet with needed non-perishable food, holiday decorations, games, drinks and more. This week, several volunteers from each organization gathered to put together the care packages for each squadron ... | November 24, 2020

To combat the recent COVID surge in Colorado, Academy leadership has implemented two rounds of 100% testing of the Cadet Wing ... | November 23, 2020

USAFA Board of Visitors convenes virtually

Space leaders come together to grapple with workforce challenges

Leaders from the Space Force, Space Command, Department of Defense, education and defense industry gathered at Doolittle Hall for a wide-ranging discussion about workforce development needs for the emerging space and cyber career fields ... | November 15, 2020

The Cadet Wing has asked for help given current pandemic restrictions. We've setup a resource where the USAFA family can provide support by writing letters of encouragement and raising funds to supply care packages for each cadet squadron ... | November 11, 2020

The fallen grads’ cutouts are part of a program launched in September by the athletic department ... | November 3, 2020

The Air Force Academy Precision Flying Team exists to create officers and pilots of character through flying training and competition at the national level ... | October 19, 2020

Representatives from the three classes that have contributed to the restoration of the USAFA Air Garden toured the project ... | October 7, 2020

Next of Kin Memorial Ceremony

As with many things, the Next of Kin Memorial Ceremony has changed this year ... September 25, 2020

McKinneys proud to include USAFA in family story

There are family stories that get better with each telling and are passed down from generation to generation like an inheritance ... | September 16, 2020

Her acquisition was made possible by donors, especially the Class of 1995 and the Class of 2019 Spirit Mission Committee, through a crowdfunding campaign last fall ... | September 3, 2020

Opportunity to serve your AOG Board

Candidate information for the 2021 Association of Graduates Board of Directors election: Deadline October 1st for nomination submission ... | August 18, 2020

The health and safety of our cadet-athletes, coaches, staff and community has been and will continue to be our top priority ... | August 10, 2020

The Air Force Academy welcomed the entire Cadet Wing back from summer break and leaders at all levels at the school continue to prioritize the health and safety of cadets, faculty and staff ... | August 7, 2020

The Mountain West Board of Directors agreed on an adjusted 2020 fall sports structure for football, women's soccer, women's volleyball and men's and women's cross country ... | August 5, 2020

The Gen. John K. Gerhart Fellowship is a two-year study program funded by the U.S. Air Force Academy Association of Graduates for the benefit of USAF Academy graduates every year. This year's recipient is 2nd Lt. Lauren Benedict '20 ... | July 28, 2020

Cadets to Return to Academy for Fall Semester

The safety of cadets, staff and the entire USAFA community, as well as the Colorado Springs community, remains the number one priority ... | July 23, 2020

Academy releases stats on Class of 2024

Letter from the Superintendent

Action Beyond the Conversation Video

On the day our nation celebrated Juneteenth, commemorating the end of slavery in the United States, the Way of Life Alumni Group hosted an online gathering to facilitate a frank conversation about racial injustice in the nation and our Air Force ... | July 2, 2020

Colorado Springs couple includes AOG in their will

We are extremely grateful to the Ryan family for including the AOG in their estate plan ... | June 30, 2020

The updated Long Blue Line Guide is now online. Get to know your Association of Graduates and the Air Force Academy Foundation and the people behind the programs designed to support graduates, cadets, parents and Academy friends! ... | June 18, 2020

Van Ovost nominated to be next head of AMC

Lt. Gen. Jacqueline Van Ovost '88 has been nominated to receive her fourth star and be the next head of Air Mobility Command ... | June 9, 2020

‘Join me’: A commentary from the Air Force Academy superintendent

As an institution of higher learning, dialogue on societal issues must be a priority at this Academy ... | June 3, 2020

40 years ago today, the '80s Ladies became the first female USAFA cadets to graduate from this esteemed institution. They paved the way for future female leaders to excel in the Air Force and beyond ... | May 28, 2020

An Air Force cadet took on a huge challenge to honor her fallen brothers and sisters in arms this Memorial Day ... | May 25, 2020

Every Memorial Day, retired Air Force Colonel Mark Roland makes the difficult trip to his son's grave in Arlington National Cemetery, but not this year because of coronavirus travel restrictions ... | May 24, 2020

New CEO of United Airlines is a 1989 grad

Scott Kirby '89 is the new CEO of United Airlines. He's a proud Air Force Academy graduate and has spent his entire career in and around aviation ... | May 20, 2020

As Air Force Chief of Staff Gen. Dave Goldfein '83 nears retirement he faces one of the trickiest challenges of his career ... | May 20, 2020

One Team, One Fight

FalconSAT-8 Ready to Catch a Ride

For the first time ever, the AOG held a quarterly Board of Directors meeting entirely via video conference ... | May 8, 2020

We are extremely proud of the Long Blue Line, especially during the last few months ... | April 24, 2020

Unified and steadfast in our commitment to the Academy

Here are some highlights of initiatives that are having a positive impact... | April 2, 2020

Class of 2020 graduation date moves up

Letter from the Superintendent

Amid these uncertain times, please know that our support and concern for you, as well as the cadets and the Academy, is unwavering... | March 23, 2020

In response to the continued threat posed by the spread of COVID-19, USAFA leadership has elected to limit... | March 20, 2020

Adjusting to the New Normal

The goal of this action is to maximize the chances of graduating our senior class on time... | March 13, 2020

The Communications Department for the USAFA Association of Graduates was recognized as one of the region’s best ... | February 27, 2020

BOV hears updates on a range of USAFA matters

The Board of Visitors gathered for a day-long meeting at the United States Air Force Academy on Wednesday, Feb. 19 ... | February 20, 2020

Unfortunately, several factors the day of the game came together to cause even greater than expected traffic delays ... | February 16, 2020

Honoring the Past, Securing the Future

The 2019 Colonel James Jabara Award went to Col. Nick Hague and Maj. Caitlin Reilly in a ceremony at the staff tower in front of several thousand cadets, Feb. 7 ... | February 10, 2020

This year’s class of cadet candidates selected Pinckney '08 because she was a leader of the people and always valued service before self ... | January 28, 2020

To the Moon and Beyond: USAFA grad joins Artemis astronaut generation

For the latest headline news view our homepage!

The AOG and AFAF are pleased to announce the first-ever CEO overseeing both organizations.

The United States Air Force Academy and the Association of Graduates are proud to announce five Distinguished Graduate Award honorees for 2020 ...

A key mission of the AOG is to highlight those things that make the Academy special ...

What are you searching for? 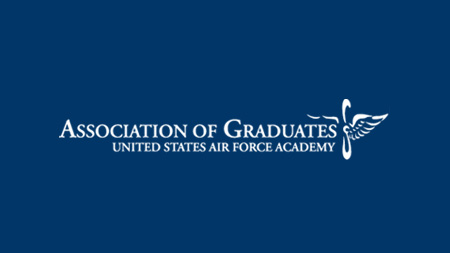 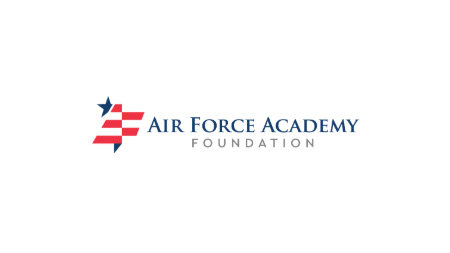 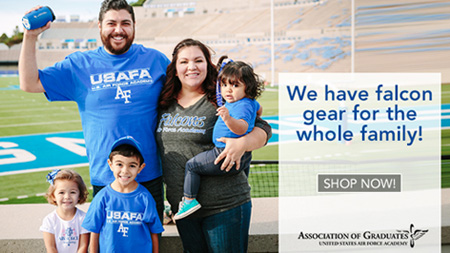 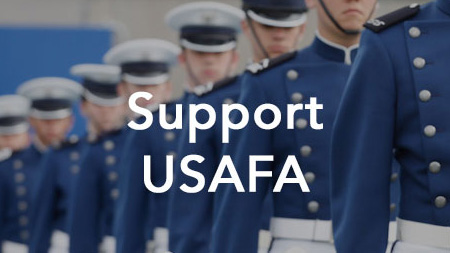