The United States Air Force Academy and the Association of Graduates are proud to announce the Distinguished Graduate honorees for 2018. 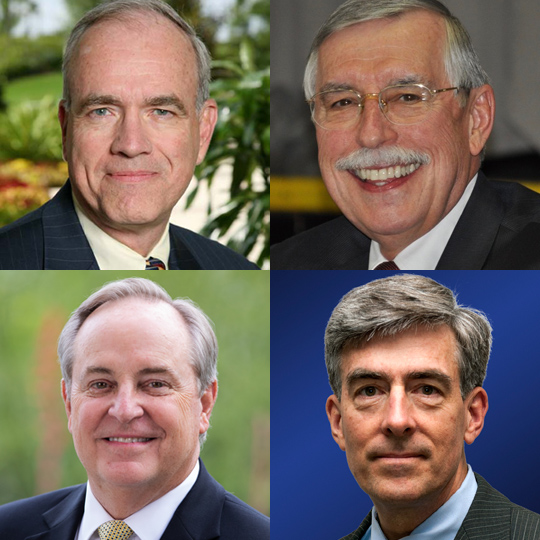 Since graduating from the Academy in 1966, Maj. Gen. Jayne (Webster Groves, Missouri) has built an impressive military and post-military resume. As an Air Force officer, Jayne served two combat tours in Southeast Asia and went on to serve in the White House under three U.S. presidents (Nixon, Ford and Carter). His corporate positions have included president of the McDonnell Douglas Missile Systems Company, vice president and general manager of the F-15 Eagle program and vice president of General Dynamics. Jayne retired as a major general in the Air National Guard in 2000. He currently is a partner with Heidrick & Struggles, a leading executive search and leadership-consulting firm.

Dr. Lambert (Austin, Texas) served as a T-38 instructor pilot in the Air Force until he pursued a medical degree at the Baylor College of Medicine. After he completed his training, Lambert would head to the Wilford Hall USAF Medical Center at Lackland Air Force Base, eventually becoming chairman of ophthalmology and chief of surgery. Lambert retired as a colonel, then was on the faculty at Emory College and Baylor College of Medicine. He later founded Retina and Vitreous of Texas. His work and writings have greatly advanced the treatment of macular degeneration. He holds several patents and invented numerous instruments to assist in the complex vitreoretinal surgeries that became his hallmark. Lambert is regularly included in national top-physician lists.

Gen. Welsh (College Station, Texas) accumulated over 3,000 flying hours in the F-16, A-10, T-37 and TG-7A aircraft during his Air Force career. Throughout his career, he had several assignments at USAFA, including commandant of cadets. He served in a number of Air Force and Joint Forces positions, the Central Intelligence Agency and the Joint Power Competency Center. In 2012, Welsh became the 20th chief of staff of the Air Force and he held the position for four years. He currently is dean of the Bush School of Government and Public Service at Texas A&M University.

Brig. Gen. Inglis (Annapolis, Maryland), who earned a Guggenheim Fellowship after graduating from USAFA, flew the T-37 and C-141 during his Air Force career. He went on to take a teaching position at the Naval Academy. In 1985, he transitioned to the Air National Guard and became the senior U.S. liaison officer with the National Security Agency (NSA). He would rise through the ranks of the NSA, eventually becoming its deputy director. President Barack Obama later presented Inglis with the Presidential National Security Medal, the highest medal for national security service. In a consulting role, Inglis helped establish the Air Force Academy’s Cyber and Computer Science Department. He also is helping lead the charge for USAFA’s planned Cyber Center.

The Academy and AOG have selected Distinguished Graduates each year since 2001. The award recognizes alumni who have set themselves apart by making a lifetime of significant contributions to our nation and their communities.

Jayne, Lambert, Welsh and Inglis bring the total number of USAFA alumni to be honored as distinguished graduates to 41.