History comes alive for USAFA cadets on the battlefields of Europe

On the 73rd anniversary of the Normandy invasion (June 6, 2017), six Air Force Academy cadets stood on  the sands of Omaha Beach, moved by  the bravery and sacrifice of the men who fought and died that day.

“I just can’t imagine being a first-wave soldier going in on D-Day, where entire boats got mowed down by machine gun fire as soon as they opened up,” says C1C Daniel Cook. “It really puts it all into perspective what all of those men were willing to do for our country just to preserve our way of life and help secure that for others across the globe.”

“A trip like this has the potential to be transformational in so many ways, not only for the cadets, but to generate excitement within the History Department,” Wettemann says. “Developing this sort of intellectual engagement with the past creates insights that cadets will carry with them for the rest of their lives.” 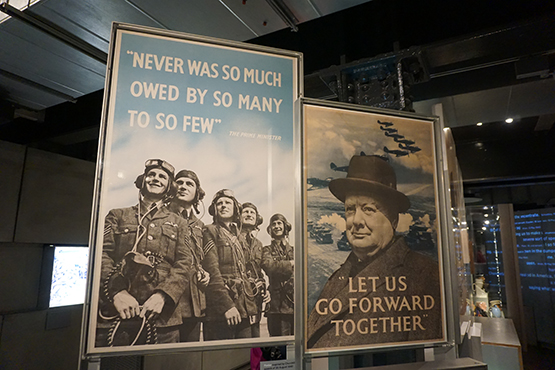 Nothing less than victory

When the cadets embarked on an evening crossing of the English Channel toward Normandy, they were each handed a copy of the letter that Gen. Dwight D. Eisenhower presented to the troops who made the same crossing to mount the D-Day invasion.

In part, Eisenhower’s letter read: “In company with our brave Allies and brothers-in-arms on other fronts, you will bring about the destruction of the German war machine, the elimination of Nazi tyranny over the oppressed peoples of Europe, and security for ourselves in a free world. We will accept nothing less than full victory!”

With Eisenhower’s words fresh in their minds, the cadets prepared to begin their battlefield tour. 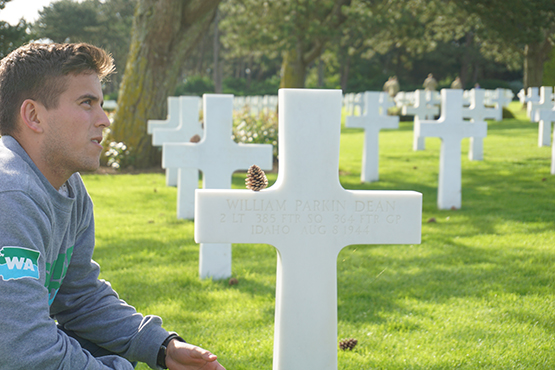 A place among heroes

Military historian John Keegan’s book “The Face of Battle” gave rise to the name for the ride and provided the conceptual framework for a semester- long study of six major European battles that span more than 600 years, including the medieval battle of Agincourt, Waterloo, the Battle of Somme, the Battle of Britain, the Normandy invasion and the Battle of the Bulge.

“Keegan looks at battle through the experience of the individual — what the individual soldier faces in combat,” Wettemann says. “So we’re trying to take his framework and overlay it with everything we’re doing with the cadets.”

C2C Charles Estep researched a paratrooper from the 101st Airborne, Warren Muck, who enlisted when he was only 17. Muck rose through the ranks  to sergeant, fighting at Normandy, the Netherlands, and finally the Battle of the Bulge, where he died in a German artillery barrage near Foy.

Standing beside Muck’s grave in the Luxemburg American Cemetery, Estep said, “His sacrifice will not be forgotten, while his position is surely earned in this place among heroes.” 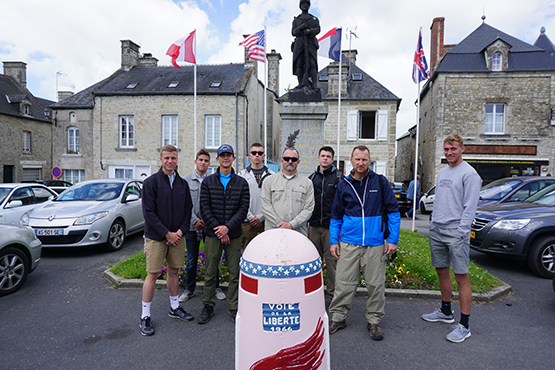 A band of brothers

When the group visited Sainte  Marie du Mont, the first French village liberated by Allied troops following the Normandy invasion, they posed in front of the village war memorial, recreating  a famous black-and-white photo taken in 1944 of the men of Easy Company from the 101st Airborne. The photo also inspired a scene from the TV mini-series, “Band of Brothers.”

Following a fine thread through one of history’s endless footnotes, the “band of brothers” title harkens back to William Shakespeare in 1599 as he recounts the 1415 Battle of Agincourt, France, in his play “Henry V.”

At Agincourt, King Henry V led a sick and diminished band of 6,000 British soldiers against an army of more than 20,000 French knights and infantrymen.

Although King Henry and his men were outnumbered three to one, his archers unleashed deadly clouds of arrows that were said to have blotted out the sun, leading to the defeat of the French knights who were bogged down by heavy armor on a battlefield that had been turned to mud by heavy rains.

In Shakespeare’s play, King Henry rallies his troops to battle saying: “This story shall the good man teach his son. From this day until the ending of the world, we in it shall be remembered. We few, we happy few, we band of brothers; for he to-day what sheds his blood with me shall be my brother.” 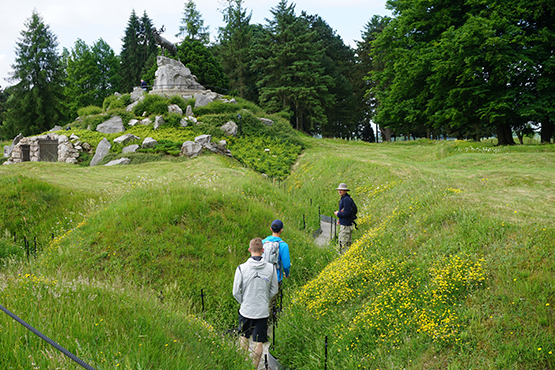 The cadets imagined the horrors of trench warfare in World War I, recounting the Battle of Somme, where more than a million men were wounded or killed during the four-month campaign. The rural countryside is still pitted with craters from more than 1.7 million artillery shells that were fired during the battle.

“Seeing the trenches they inhabited,  the distance they had to cover through  no man’s land, and their overall objective helped me better understand the history of what happened,” says C2C Charles Estep.

Visiting the Douaumont Ossuary and Necropolis at Verdun, which shelter the bones of more than 130,000 French and German soldiers who died in the WWI battle, gave C2C Brett Stell insight into the reluctance of the French to do battle with the Germans a second time in WWII.

“The French cemetery at Verdun was pretty, but the bones underneath the monument were kind of creepy,” Stell says. “You can see why France was slow to oppose Hitler and embrace appeasement rather than risk another war like the First World War.”

In Belgium, the team walked through the thickly wooded forests of the Ardennes, discovering the remnants of foxholes where Allied troops battled the German army during the Battle of the Bulge.

When the cadets visited the battlefields of Agincourt, Somme and Waterloo, they were grouped into battle pairs, tasked with describing the historic conflicts from both sides of the struggle.

As C1C John Wendt stepped onto the medieval battlefield at Agincourt, the historical accounts he had read prior to the trip came to life.

“Being at the battlefields and seeing the topography of these famous sites gave me the perspective that each commander had and why they acted in such a way,” Wendt says. “My battle pairs presentation was on Agincourt on the French side. The battlefield was very small and one could see how the arrogant French knights thought they could defeat a ragtag band of English. To see such a historical battlefield was amazing.”

Moving forward in time from Agincourt, the cadets explored the military achievements and ultimate defeat of Napoleon Bonaparte at Waterloo in 1815.

Speaking to the team at Waterloo gave C1C Daniel Cook a new perspective  on the battle. “Having to present on the Battle of Waterloo gave me a much deeper understanding of what happened in that battle,” Cook says. 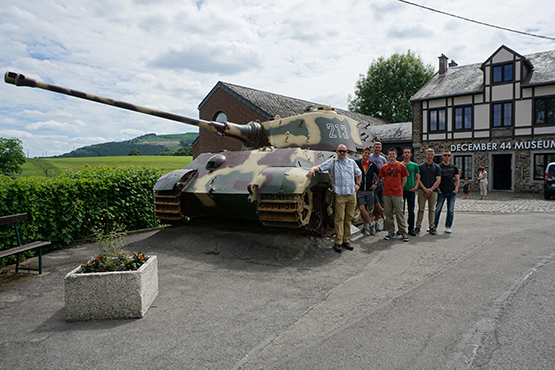 Building warriors for the modern profession of arms

For 14 days, the cadets were immersed in 600 years of military history, but they also found time to experience local culture.

“As for the trip itself, it was a great mix of history and culture,” says C2C Charles Estep. “During the day, we would do our thing visiting sites and battlefields, but after we would find time to experience the culture, people and communities in which we found ourselves.”

The Face of Battle Staff Ride made a tremendous impact on the cadets. With support from Academy friends and graduates like Don Raines, Grotelueschen would like to coordinate future rides focused on different aspects of military history.

“We are preparing our airmen to perform a mission and serve our country around the world,” Grotelueschen says. “Seeing the great battlefields of history first-hand allows them to develop a greater understanding of how battles are fought and wars are won and lost. By walking  the same ground, you get a much more personal view of warfare. Every history major should have this experience before he or she graduate graduates.”