Doolies closing in on important recognition 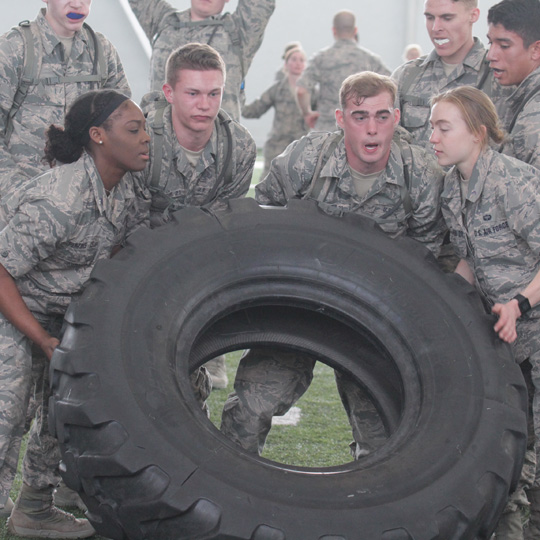 The Class of 2021 is well on its way to being recognized by the Cadet Wing. Saturday afternoon’s “Run to the Rock” came off without a hitch. The only thing remaining is the presentation of Prop & Wings Saturday evening, then fourth-class cadets will officially be recognized as part of the Cadet Wing.

Opening evening of Recognition (Thursday), featured the Wing Round Robin on Stillman Field.

Day two of the annual Recognition challenge (Friday) featured plenty of physical exercise, mental trials and teamwork as the fourth-degree students at the United States Air Force Academy took part in the event.

Squadrons rotated among a variety of stations to test their competencies in various tasks. At the Holaday Athletic Center, Doolies were put through the paces with the Battlefield Airman Course. At Stillman Field, squadrons took part in the Maltz Challenge. Up on the Terrazzo, cadre put the soon-to-be recognized cadets through a variety of physical challenges.

She noted that a few changes were implemented for this year’s Recognition to ensure that the four degrees meet all of the standards expected of them.

“We’re hitting a lot more on the purpose,” she explained. “We’re not doing something for the sake of doing it. We’re doing it to ensure growth and that the objectives are being met.”

Perhaps the biggest lesson from the three days is the need for teamwork, Barry said.

“It’s about maintaining a positive attitude and motivation even when your body is tired and your classmates are tired,” she said. “But you’re still pushing through together … because you know you’re so close.”

She said the Doolies are being “physically, mentally and emotionally” challenged as they make their way toward Saturday and the eventual “Run to the Rock” and the presentation of the Prop & Wings signifying that the Class of 2021 has been recognized.

“The four degrees are trying their hardest to go through this,” she said. “But it’s challenging for everyone.”

Lowe added that leadership lessons are a key part of the takeaway from the three-day event.

The Doolies are finishing strong, Lowe said, knowing that more privileges await after the completion of Recognition on Saturday.

Once recognized, four-degree cadets no longer have to run on the marble stripes, no longer have to stand at attention all the time, and can finally wear civilian clothes for the first time since arriving at the Academy.