The superintendent said that military units would assemble and return to the site of a battle to walk on the land, visualize what had taken place there, and attempt to learn from the experience. Air Force units, he went on, don’t typically do staff rides, due to the different nature of aerial operations.

Despite that fact, he incorporated the concept into a “USAFA Staff Ride.” He timed the event to coincide with the 60th anniversary of the Air Force Academy’s move from its temporary location at Lowry Air Force Base in Denver to its permanent location north of Colorado Springs.

The actual staff ride at the Lowry Air Force Base site was the key component, but not the only event, in the two-day commemoration of the anniversary.

Eula Harmon Hoff, daughter of the Academy’s first superintendent, Lt. Gen. Hubert Harmon, was also in attendance, as were a few members of the original Academy staff.

Festivities began with a reception at the Carlton House on Friday evening.

On Saturday morning, in Arnold Hall, Dr. John Terino, chairman of the Department of Airpower at the Air Command and Staff College, gave a well-received lecture on the creation of the Academy.

From there, graduates and Academy staff members boarded four buses for the “staff ride” to Denver.

The first stop was the Wings Over the Rockies Air & Space Museum, which had been an aircraft hanger when the Academy was located at Lowry. The Museum’s President and CEO, Maj. Gen. (Ret.) John Barry ’73, played host at the luncheon held there.

Representatives from every decade of Academy graduates recounted their cadet experiences and the times in which they attended USAFA. Marty Marcolongo, Association of Graduates president and CEO, spoke on behalf of the 1980s-era graduates.

From there, it was back onto the buses for a windshield tour of Lowry. Participants saw several sites that had played major roles in the Air Force Academy’s days at Lowry, including the academic buildings and the Commandant of Cadets building (which has been placed on the National Register of Historic Places). The tour also stopped at the sites of other facilities, many of which had since been torn down. Despite that, it was easy to imagine the Academy being there, with young men scurrying from activity to activity.

The final event took place back at the permanent site of the Academy. Weather prevented the Cadet Wing from assembling on the Terrazzo, but Lt. Gen. (Ret.) Bradley Hosmer, the Academy’s first graduate to go on to be Superintendent (1991-1994), was able to give his remarks. In addition, Gen. Barry and Mr. Marcolongo dedicated a plaque that will be displayed at the Wings Over the Rockies Museum, forever commemorating the important role Lowry Air Force Base played in the history of the Air Force Academy. The AOG provided half of the funding for the plaque, splitting costs with the Museum.

By all accounts, the first staff ride held at the Academy in anyone’s memory was a smashing success. Hopefully, it will not be the last staff ride. 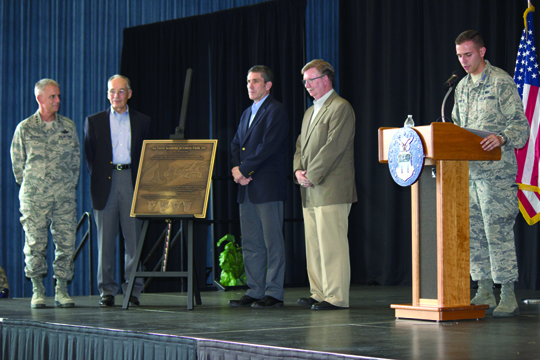