Return to the wild blue wonder

USAFA Class of 1959 grad joins Thunderbirds for a thrilling flight

After a several-decade break, Paul S. Lasen (USAFA Class of 1959) returned to the cockpit of an Air Force fighter jet Monday, May 22. 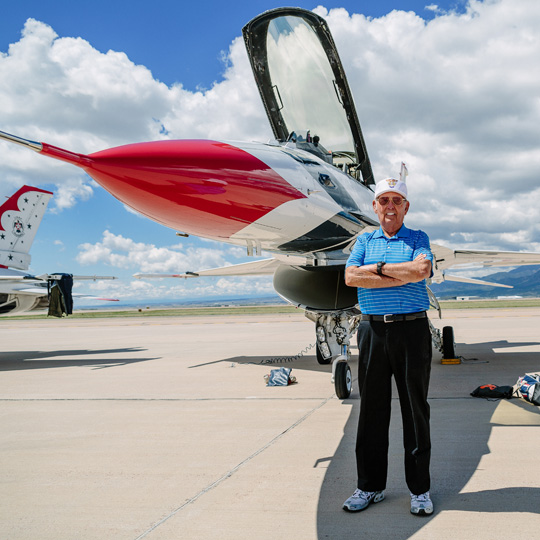 Lasen, who holds the distinction of being the oldest living graduate of the United States Air Force Academy at 83, was already a second lieutenant in the Air Force and had his navigator wings when his chance to join the Academy’s first class arrived.

When he was accepted into the Air Force Academy in 1955, he had to surrender his Air Force commission in order to attend, which he gladly did so that he had the best possible chance to become a fighter pilot.

“If I stayed in as a navigator, it would have taken at least four years before I could progress to pilot training,” he says. “The Academy would give me four years and a degree. The bigger plus for me was the fact that it was mandatory that you go to pilot training if you were physically qualified at time of graduation. I always wanted to be a pilot and this was my way of getting to that position. It’s worked out beautifully.”

As a result of his previous service, Lasen was a few years older than most of fellow cadets. That’s how he attained the honor of being the oldest living graduate.

“It’s not a position that’s earned. It’s simply an accident of birth,” he smiled. “I’d love to be the oldest grad for quite a few more years.”

Lasen was commissioned in the Air Force again four years after arriving at the Academy, then went to pilot training. He would become an instructor pilot for several years, before being deployed to Vietnam where he flew 128 combat missions in the F-105.

“From there on, it became a wonderful career,” Lasen recalls. “I spent 20 years with the Air Force.”

He retired in 1978 and went into civilian aviation.

The campaign to secure Lasen a ride with the Thunderbirds began in early May, when E. Adrian Van Zelfden, USAFA Class of 1969, sent out a plea to anyone with connections with the Air Force air demonstration team.

Because the Air Force is celebrating its 70th anniversary this year, Van Zelfden felt it would be wonderful if the Thunderbirds would honor the oldest living graduate of the Academy.

“I personally feel a huge amount of gratitude to the Class of 1959,” Van Zelfden wrote. “Those guys were the pioneers, and they made us all proud.”

By Monday morning, Lasen was more than ready to put on a flight suit again and head skyward. He was scheduled to fly with Capt. Eric Gonsalves, a USAFA Class of 2008 graduate.

“If I told you I wasn’t excited, you wouldn’t believe me,” he laughed. “You can’t fail to be excited for something like this. We’ll have a really great time.”

“It will be interesting to me to see how many Gs I can tolerate now,” he adds. “It used to be just a part of my daily job. I’ll be very interested to see how I hold up.”

“It brings back a lot of memories – a lot of good memories and some more challenging than others,” he says. “Obviously, the Academy laid the foundation for my whole career, which up until this point I’ve been very happy with. I’m one of the luckiest guys in the Air Force.”

Walsh says the USAFA graduation is one of the most challenging sites that the Thunderbirds perform at each year. The terrain and the stadium add to the challenge.

“We train every day, sometimes twice a day, to perform a safe show,” he assures.