If at first you don’t succeed…

NASA astronaut Nick Hague, who was forced to abort his recent planned mission to the International Space Station, is scheduled to launch again Feb. 28, 2019, from the Baikonour Cosmodrome in Kazakhstan. 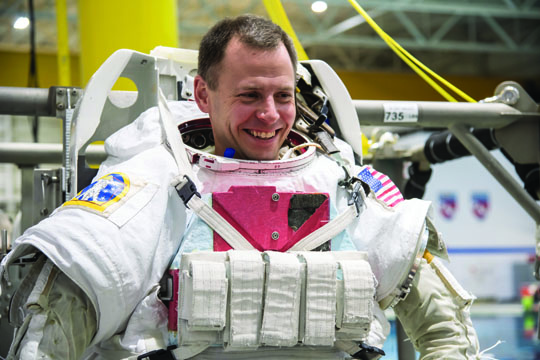 Hague will launch with Alexey Ovchinin of the Russian space agency Roscosmos, who was his commander and crewmate on the aborted mission in October, and NASA astronaut Christina Hammock Koch aboard the Russian Soyuz MS-12 spacecraft.

During their mission, the station crew will take part in approximately 250 research investigations and technology demonstrations not possible on Earth to advance scientific knowledge of Earth, space, physical,and biological sciences. Science conducted on the Space Station continues to yield benefits for humanity and will enable future long-duration human and robotic exploration on missions to the Moon and Mars.

The crew also is scheduled to be onboard during the first test flights of NASA’s Commercial Crew Program, which will return human spaceflight launches to U.S. soil.

On Oct. 11, Hague and Ovchinin were scheduled to join the station’s Expedition 57 crew, but were forced to abort their mission when their Soyuz’s rocket booster experienced a malfunction shortly after launch. Flight dynamics specialists determined Hague and Ovchinin achieved enough altitude on their aborted climb to orbit to qualify for previous spaceflight status, making this Hague’s second spaceflight and Ovchinin’s third.

Hague is a native of Hoxie, Kansas, and a colonel in the U.S. Air Force. Prior to his selection as an astronaut in 2013, he was part of the Air Force Fellows Program in Washington, where he worked as an adviser to the U.S. Senate on matters of national defense and foreign policy.