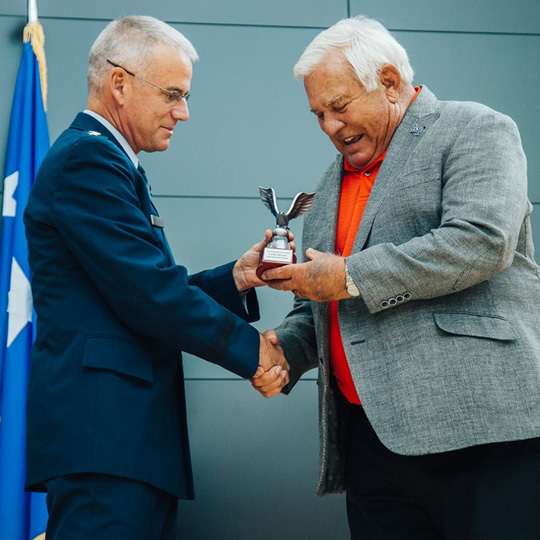 The award is given to individuals or groups who have contributed significantly and directly to the United States Air Force Academy through their generous donation of time, resources or influence.

“You are the strength of the Long Blue Line,” Silveria told the honorees. “They made our Academy a better place for future generations. We’re grateful for the example of service that they set every day. Their support and generosity is an inspiration.”

Gen. Lorber has maintained close ties with USAFA and its Athletic Department for approximately 50 years.

In 2011, he was elected as the first chairman of the board for the Air Force Academy Athletic Corporation (AFAAC). Under Gen. Lorber’s leadership, when government sequestration threatened to cancel the 2013 Air Force versus Navy football game in Annapolis, the AFAAC quickly raised $230,000 to support the team’s travel expenses and kept the 41-year competition for the Commander-in-Chief’s Trophy alive. His vision for the nonprofit organization extended beyond football and, through his guidance, AFAAC now supports the Academy’s 27 intercollegiate programs.

“I accept this with deep appreciation and humility,” Lorber told the crowd. “During my 55 years of service, I’ve been blessed with many opportunities, faced many challenges, worked for and with so many wonderful men and women, and received countless awards. But this is the most significant award I’ve received in my life.”

He said the Academy has always been near and dear to his heart, so he has always felt compelled to give back to the institution.

The Class of 1970 Gift Committee’s commitment to excellence at the Academy has spanned more than 20 years and has resulted in numerous heritage projects, including the War Memorial Wall along the Heritage Trail, the Southeast Asia Pavilion and the Plaza of Heroes.

In accepting the honor, Dahlen said the committee was “astonished” when they were notified of the award.

“It was very unexpected,” he said. “We felt honored and humbled. There are so many people who give back to the United States Air Force Academy, for us to be singled out for this award is truly humbling.”

Dahlen said the Class of 1970 takes pride in being known as the “heritage class” for the Academy. Twenty years ago, the class lagged well behind other classes in giving back to the Academy. Today, Dahlen said proudly, it is one of the top classes.