On a hot June morning, the 10th Air Base Wing said goodbye to one commander and welcomed a new one during a change of command ceremony at the United States Air Force Academy. 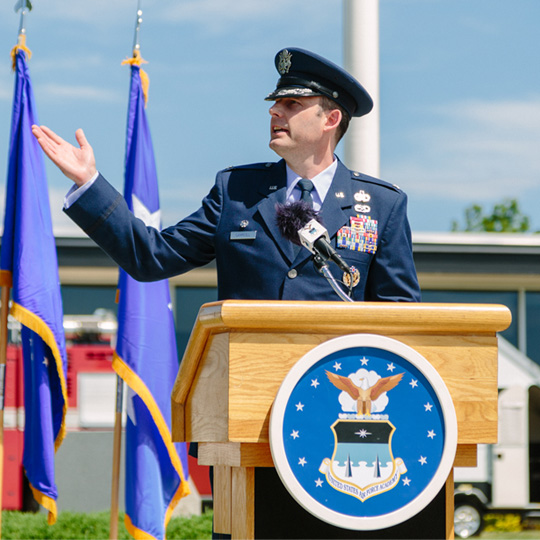 Col. Shawn Campbell speaks to the crowd during Tuesday’s change of command ceremony.

At the start of the Change of Command ceremony, USAFA Superintendent Lt. Gen. Michelle Johnson ’81 took the opportunity to thank all members of the 10th Air Base Wing.

“You’re part of everything,” she told the 10th ABW airmen. “It’s no small task, given the wide variety of challenges and responsibilities that are upheld by the 10th Air Base Wing.”

She particularly applauded the Wing’s ability to keep the campus open to the public, yet keep cadets and staff safe while they continue to pursue the important mission of the Academy.

“You do it amazingly well,” she said. “You should be so proud of the mission of this Wing and its accomplishments.”

She also thanked Dunn for his two years of service to the Academy, its staff and its cadets.

She singled out several accomplishments during Dunn’s tenure, including improved relationships with the community, the reopening of the Santa Fe Trail, the soon-to-be increased Internet bandwidth throughout the base and successful long-ranging planning for facility improvements in the years ahead.

“These two years have been an enriching journey working together,” she said. “He’s set strong foundation here for Col. Campbell and the team to build on… And you do it all with a smile. Your personality simply lights up a room.”

“I know you will apply your unique talents and perspectives to this whole enterprise,” Lt. Gen. Johnson said. “You’re going to accelerate the momentum … and take us to another level.”

Lt. Gen. Johnson outlined some of Campbell’s previous Air Force assignments —including his most recent job as director of manpower and personnel for the U.S. Transportation Command and his time as a national security fellow at Harvard University — while noting that his varied background will help him succeed in his new role.

“He’s a thoughtful leader and well prepared to take on the complex mission that we have,” she said of Campbell.

Lt. Gen. Johnson emphasized that all Air Force journeys are relay races, as command regularly shifts from one leader to the next.

“This is your leg of the journey,” she told Campbell. “Troy has run his leg well, and is ready to hand off the momentum and foundation that he has established in this Wing.”

Prior to the change in command, Dunn was awarded the Legion of Merit with the first oak leaf cluster for his distinguished service at the 10th Air Base Wing.

In his final moments as 10th ABW commander, Dunn thanked his fellow airmen for their support and hard work during his tenure.

“You all … who serve here at the Air Force Academy truly cherish and value this coveted assignment,” he said. “That’s why we serve with such great pride, high morale and strong conviction.”

Dunn assured all in attendance that his wife, Sonya, both leave feeling good about how far the Academy has come and feeling optimistic about the future of the institution.

“I’ve been honored to serve with you and to serve as your wing commander,” he said. “But, folks, my time is up. Remember this one thing – you’re at the United States Air Force Academy. Be great and be grateful.”

Dunn, who has commanded the wing since June 2015, is headed to a new assignment at the Pentagon as the head of the Air Force Personnel and Policy Division.

As the change of command took place, Dunn handed the 10th ABW guidon to Lt. Gen. Johnson, who then presented it to new commander Campbell.

After assuming command, Campbell offered a few comments for the crowd, gathered at the base of the Front Range.

“Here I stand, amazed, appreciative and astounded at the majesty of these mountains,” he said, “at the gravity of this moment, at the importance of this mission.”

In his new role as 10th ABW commander, Campbell admitted that he stands on the shoulders of giants who came before him.

“We see further because of them,” he said. “And we will continue forging the future as their legacy inspires.”

Campbell said he looks forward to being a part of the 10th ABW team and leading in the days ahead. He pledged to follow closely in Dunn’s footsteps — and in the footsteps of others before him — as he seeks to advance the mission of the Wing.

“I pledge to you today, to the very best of my ability, to carry forward with the same passion, purpose and promise they displayed,” Campbell said.

Col. Shawn Campbell speaks to the crowd during Tuesday’s change of command ceremony.